Hong Kong Protests: Just Getting Started or Going Too Far?

Violent riots in the name of democracy are hurting the city of Hong Kong instead of helping it. 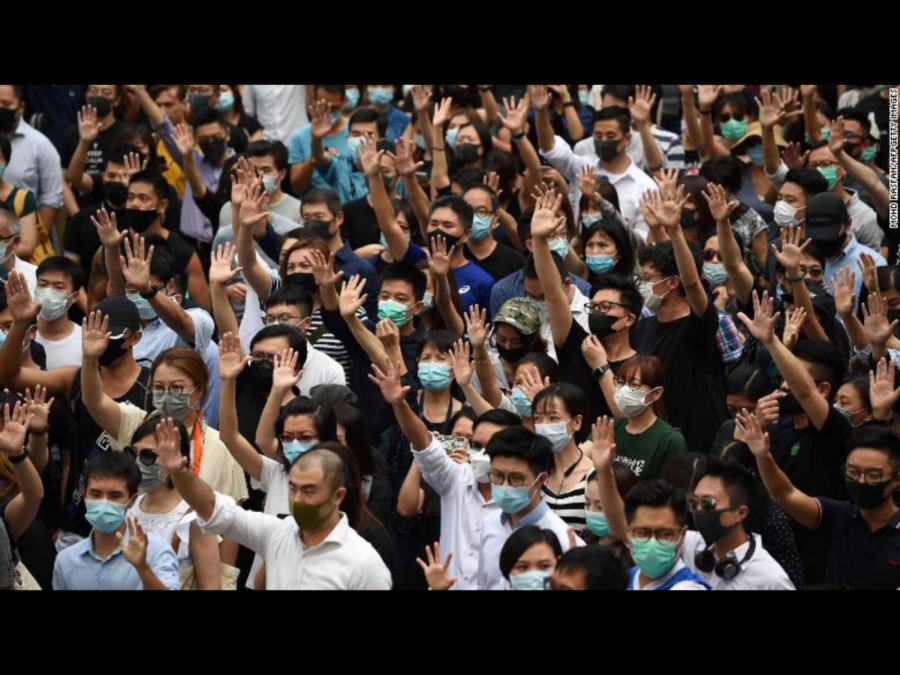 Chloe Chu and Samantha Wo

The youth of Hong Kong has tirelessly rocked the city for months now, taking to the streets dressed in black attire from head to toe. What started as a peaceful protest against an extradition bill has escalated to violent anti-government, pro-democracy riots.

The extradition bill allowed the Hong Kong government to send suspected criminals to China, Macau, and Taiwan and face trial there for crimes such as rape and murder. Many in Hong Kong feared that they would be treated unfairly under China’s judicial system and could be tried unjustly, put in detention, or even tortured. Despite being reassured that Hong Kong courts would have the final say, only crimes with max sentences of 7 years would be sent out, and no political or religious crimes would be sent, many Hong Kong citizens were not placated.

Nearly 2 million Hong Kongers protested peacefully against this bill. Although the bill was finally withdrawn last month, it brought attention to Hong Kong’s increasing tension with China. As a former British colony that was returned to China, Hong Kong has always had special freedoms and autonomy under the “one country, two systems” deal.  These freedoms are slowly declining: China has been accused of meddling in Hong Kong politics and pressuring artists to self-censor themselves. To rioters, many of whom are students, this bill is a prime example of that and a reason to take things further.

Conflicts among police and young activists are becoming increasingly vicious, with police using tear gas and blue dye water cannons in the hopes of identifying the protestors under their masks and black clothing. Pro-democracy activists have also escalated their efforts, destroying public property and engaging in violent skirmishes with police.

“The students have every right and reason to blame the Hong Kong government for not stepping up and serving its people, especially since the Basic Law granted Hong Kong the right to be self-governed until 2047, but they should voice their disappointment in good faith,” said William Huang, a senior. “By spray-painting government property and exerting physical force against those who oppose their cause, the protesters fail to practice civil disobedience in its entirety. I believe such discourteous acts are examples in which the matter has been taken too far.”

Public shops such as restaurants and supermarkets have gone bankrupt, forced to closed down with owners with no money to pay rent or supply inventory.  As a result, many blue-collar workers have lost their jobs and have been unemployed for the past few months with no sign of resuming work. In addition, real estate in Hong Kong has declined in price, indicating the negative effects of the protests on Hong Kong’s economy.

Beyond economic struggles, Hong Kong faces an issue of public safety as well. Hong Kong’s public transportation systems are a highly popular protest spot where demonstrators provoke travelers with chants, leading to many parts of airports being forced to shut down with hundreds of flights canceled. Subway stations have also been flooded with hundreds of protestors, often injuring people in the area. In light of the demonstrations, commuters have avoided these sources of public transportation.

The future is not looking bright for the protestors, as many are already facing up to 10 years in jail and hundreds are still awaiting trial. Despite the threat of punishment, the Hong Kong protestors have drawn the attention of the rest of the world, with some advocating for further action while others implore for another path to change.

The protestors are putting themselves and the rest of Hong Kong in danger. It is only a matter of time before the military of Mainland China will arrive and, considering that Hong Kong is a small island that is severely unprepared to tackle a fight on that scale, the results would be devastating. It would be in the activists’ best interests to end this violence before further harming the city.

“Freedom of assembly, speech, and press, as well as the right to a fair trial by a jury of peers, are fundamental rights that must be granted to all nations and societies,” said Mr.Mannebach, a social studies teacher, “Jefferson said that, ‘The tree of liberty must be refreshed from time to time with the blood of patriots and tyrants.’ While Jefferson’s words of liberty have rung loud throughout the centuries and around the world, violence begets violence, and I wish the people to secure the freedoms that they deserve without more bloodshed.”