Meet the Valedictorian and Co-Salutatorians of the Class of 2021 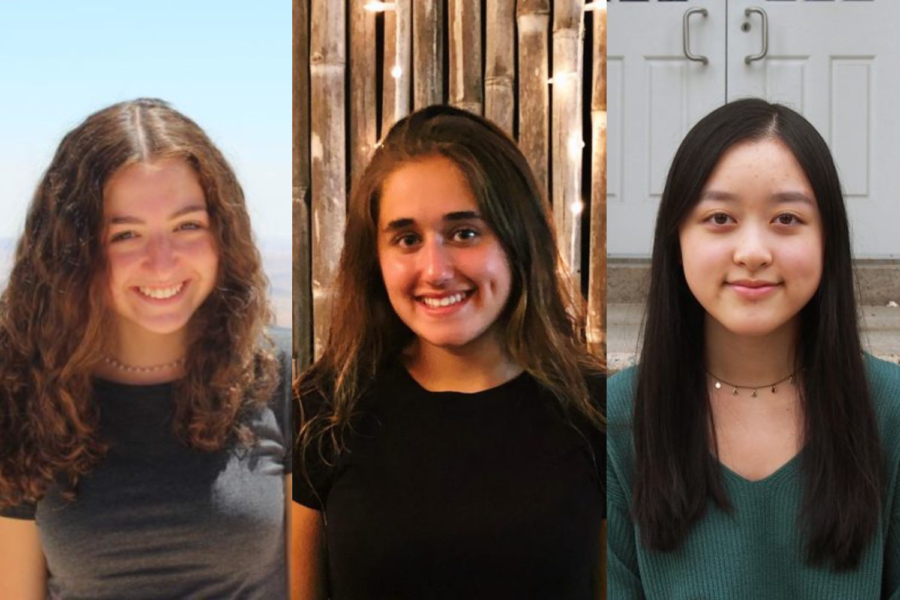 The phone call home with the announcement was unbelievable for all three students.

Mina Nabavian even questioned why the Guidance Office was calling her the day before break. “I literally just sat there for a few minutes in complete disbelief,” Nabavian said. “For the whole break, I would tell people my exciting news with the disclaimer that I might’ve heard the call wrong.”

For Liel Ezroni, the shock of it hasn’t settled in even after three weeks since the announcement.

Being valedictorian and salutatorian is a dream that almost every single high school student has. Mina Nabavian has been named valedictorian, while Lauren Yu and Liel Ezroni are co-salutatorians, the three of them attaining the seemingly impossible.

Sharing the news with family and friends has been a heartwarming experience for all of them.

Yu explained that the news gave her a chance to reconnect. “I got a lot of phone calls and texts from friends and family, some of whom I haven’t spoken with in a while because of the pandemic,” Yu said. “Most of my current teachers and even some of my teachers from previous school years also congratulated me.”

Having her family and friends around Nabavian made the announcement even more unforgettable. “My friends and family have all responded with so much love, and so that has made this feel so much more real and special,“ Nabavian said.

Receiving this recognition is something that all three students most definitely earned.

“Becoming salutatorian was by no means an easy process,” Ezroni said. “It takes tons of hard work, determination and sacrifice.”

Yu, Ezroni and Nabavian all were extremely grateful for the people that supported them throughout their high school years.

“None of this would have been possible without my closest friends and family in my corner,” Ezroni said. “I’m grateful for the special friendships I have made at North — shoutout to all the people who have been there for me along the way.”

As this year’s valedictorian and salutatorians graduate North High and go on to do great things, they leave us with some advice. Yu and Ezroni both emphasize the importance of balance and taking care of your mental health.

“It’s important to find the right balance between studying, extracurriculars and activities you just do for fun,” Yu said. “Finding that balance while giving yourself breaks is really important for your stress levels and mental health.”

“You should always focus on your wellbeing and make sure you’re doing what makes you happy,” Ezroni added.

Nabavian stresses the importance of approaching each class with enthusiasm and effort. She attributes a part of her title to her involvement in the classroom. “I was new to the district in ninth grade, and so I felt like I needed to try harder to adjust to the demands of our school,” Nabavian said. “That forced me to get extra involved in the classroom, and I think that’s what this title is really a product of.“

Yu also advises choosing classes wisely and making sure that you take classes that you enjoy. “Chances are you won’t love every class you take in high school, but I definitely got better grades and had a better overall experience in the classes I was genuinely interested in,” Yu said.

By taking this advice, students hopefully will be able to follow in the footsteps of our valedictorian and co-salutatorians and achieve great academic success in the future.

Once again, congratulations to Mina Nabavian, Liel Ezroni and Lauren Yu for becoming our 2021 valedictorian and co-salutatorians.