Monkeypox: The Next Covid-19? 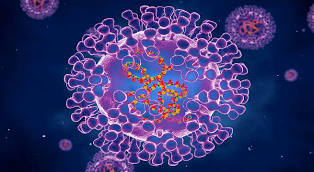 Just as COVID-19’s rampage across our nation is finally slowing to a halt, there has been a new virus raising concern across the country. While there hasn’t been much time so far to research monkeypox, people have been convinced that it is going to be the next pandemic.

While this statement may be alarming at first, there aren’t many facts to support this claim. The CDC has not had much time to look into this virus, as it has only become problematic recently, so we cannot jump to conclusions such as these.

Monkeypox is a disease named after the virus of the same name, which is a type of orthopoxvirus. This virus has been around for over 60 years and has affected humans for nearly as long, but it has only recently spread to the US.

According to the CDC, it is understood that contact with West African animals, products, or people that have recently traveled to such places could be how the first case of this outbreak was brought to North America.

Monkeypox is worrisome to many people across the nation, as the US has just come out of a pandemic that has been tarnishing the United States’ economy and society for a few years already; but, according to NYC Health, it is very rare.

As of now, experts understand that this virus can only be transmitted through bodily contact or other uncommon ways of transmission, such as being exposed to an infected person’s skin lesions or sores. Infected people have been treated very quickly, so the transmission of monkeypox does not pose as great of a threat.

The situation is being closely monitored to limit the spread. As of June 3, a total of 25 confirmed cases have been across the nation, five of these cases coming from New York. Besides, in a small town like Great Neck transmission is even rarer.

“I’m not scared of monkeypox,” Senior Chris Yang said. “We’re in an area that’s relatively protected, and we have the health services to deal with it here.”

Symptoms of monkeypox within the first few days of having it include the obvious fever, exhaustion, and body aches. The main identifiers, however, are swollen lymph nodes, rashes, and scabs, as well as large pus-filled pimples all over the skin and face. This would normally last for an average of 3 weeks.

Immunocompromised people and those who have traveled to West Africa recently are more susceptible to contracting the virus.

There have also been several advances in terms of treatment; A medication that has previously treated smallpox and another medication used to oppose the effects of AIDS are now being used as treatments.

The direction that monkeypox is headed seems to be unclear, but monkeypox is surely not the next COVID-19, as medications are already being trialed and tested.

“Monkeypox is something we will have to wait and see about,” Freshman Jacob Levine said. “It’s very new, so I guess we’ll just have to give it a while.”